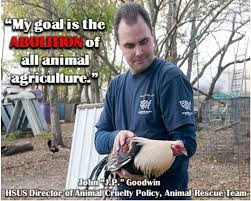 John "J.P." Goodwin, like the majority of animal rights activists has no documented education in animals.  He dropped out of high school to work as a janitor because 'school' was getting in the way of his animal rights advocacy. That's right, one of the Humane Society of the United States (HSUS) top senior manager's is a former janitor.   That's his grand education in the housing and care of animals.  As a decade's long vegan, that's his grand education in nutrition.  To put it plainly, Goodwin has no formal education at all yet he makes a higher salary than most average Americans while he works to take the animals out of their homes and off their dinner plates.

He started his formal career as an animal rights terrorist as part of the Animal Liberation Front (ALF), domestic terrorist organization.   He quickly found out how lucrative the non-profit world is and founded his own anti-fur group to promote the use of environmentally destructive plastics over naturally renewable and biodegradable fur.

Let it be stated loud and clear, that myself and the Coalition to Abolish the Fur Trade support these actions 100%. We will never, ever, ever work with anyone who helps the FBI stop the A.L.F.” John “J.P.” Goodwin

He formed the Coalition to Abolish the Fur Trade, to target lawful businesses in California and acting as a "Press Officer' for ALF's No Compromise publication. No Compromise is famous for promoting direct acts of violence against animal owners and contained articles on how to make homemade napalm to use against animal businesses.   ALF in its prime committed millions of dollars of damage against lawful American businesses and injured numerous people.   ALF and its sister group, ELF, bombed universities and ski resorts.  They attacked restaurants and private homes.   After 30 years of terrorist attacks and a campaign by the FBI to jail their top terrorist leaders, ALF has reincarnated itself as a 'new' group calling itself Direct Action Everywhere (DxE).   More on them later.   Listen to a description of how far farmers had to go to protect themselves from Goodwin and his ALF pals. 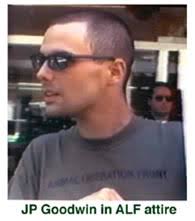 “Newspapers have stated that some Utah ranchers are sleeping in their trucks with shotguns cradled in their arms. Those who are in bed at night are so paranoid that the slightest noise has them jumping up and running outside. Some farms have put up heavy duty electric fencing, and installed flood lights. I guess this was to put the finishing touches on their concentration camp appearance. Others have security dogs, security guards and/or hourly patrols. Either way, the A.L.F. has proven that they will by-pass all of this and free the animals, one way or another. John Goodwin.

Animal rights activists talk a good line about how they just want to 'free the animals.'  What most people don't understand is that they free them to kill them.   Most animals end up dying a terrible death after ALF attacks.   After a series of arrests and felony convictions in four states (two in Tennessee, one in Texas, one in Georgia and one in California) and multiple lawsuits over his efforts to destroy businesses, Goodwin reinvented himself as a dog fighting expert. A topic he has absolutely no experience in.

He was hired by sex predator Wayne Pacelle to join the Humane Society of the United States (HSUS), testifying as an 'expert' witness in court cases and lobbying legislators. Goodwin has also spoken at a number of Prosecutors Conferences on "Animal Fighting" and other issues to train America's prosecuting attorneys in how to frame Americans for crimes they have not committed. He has taught educational workshops to animal control officers on how to be on the front line of destroying animal owners and manufacturing evidence.

In 2007, Goodwin traveled to Wisconsin to testify at a trial as an expert witness in animal fighting. When the defense attorney questioned him, it was revealed to the court that Goodwin has never seen a dog fight in his life. His only experience has been watching animal extremist propaganda videos.  Videos that are decades old and frequently filmed in foreign countries.   The Wisconsin judge agreed with the defense attorney's motion to block Goodwin from testifying and issued the following opinion.

“I look at Mr. Goodwin’s qualifications, and it seems to me that they belong in the world of issue advocacy. His background, his training, his experience is in the field of advocating for a particular issue, in this case animal-related issues. But in looking at his qualifications, I don’t see anything in the way of training with respect to animal physiology, for example; law enforcement training that would give me some factual basis for the world of dog fighting. I don’t see anything about other than books that he’s read, any course work that he’s taken in the areas of animal fighting, and particularly dog fighting. Instead Mr. Goodwin’s entire background seems to be involved in advocating for this particular issue.”

After being exposed in court as a fake expert, Goodwin was moved over to anti-pet breeding campaigns at HSUS and remains a senior manager there today.   Still a public speaker and legislative lobbyist nationwide, he now boasts an even more inflated job title.  Director of Animal Cruelty Policy.  Nice gig for a high school dropout.   The animal rights world has a history of constant promotions for convicted felons and sex predators.  The dirtier the criminal, the higher they rise in the field.  Goodwin is no exception. 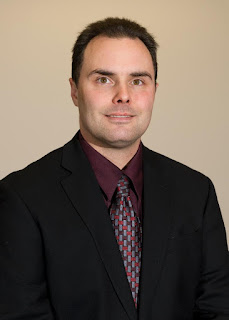 The ugliest impact this convicted felon has had on America is his founding of a frightening non-profit group in Virginia, called The Virginia Animal Fighting Task Force.  Originally founded as a so-called anti-dog fighting force, this 501(c)3 non-profit organization is now being used as a private vigilante team to attack goat farmers and shut down small zoos in the state.  Activities that have nothing to do with dog fighting.   They are the major player behind Virginia's "Animal Law" unit in the state's attorney generals office.   To read more about this, please see my previous article on this subject:  Virginia Law Enforcement Once Again Embrace Terrorism.
Posted by Katharine Dokken at 7:35 AM