The Dog Fancy eats One of their Own

An anonymous tip recently led to the theft of 69 or 71 dachshunds under the color of law.  I say 69 or 71 because the thieves can't get their story straight.

On January 6th, the Massachusetts Society for the Prevention of Cruelty to Animals (MSCPA), a private non-profit charity claims they took 69 dogs away from their legal owner, the Aguiars.   Yet in this article on the same day, they claim they took 71.  Can't they count?   Ask yourself this, why is a private non-profit charity committing an action of this kind.  Where are the police?  And why are they accepting an "anonymous" complaint?  That violates the United States Constitution which gives everyone of us the right to face our accusers.

To back track and provide more information, Cedarshake Kennels is owned by Edward and Shirley Aguiar who run Shirls Whispering Winds Dachshunds. The kennel is a former boarding kennel which was resold in recent years to the Aguilars.  However, not long after the sale Ed lost his job.  Then Shirl's mother died in 2013.  But that's not all.  They had an enemy in Dachshunds who had been following them.   Animal rights activists love to exploit situations like this.  They want animal owners to be suffering, it makes them easy targets.


"Halpin said the MSPCA visited the property three times between 2011 and 2013, but "no violations of the state's animal cruelty statute were identified at that time." He said, though, that he often encounters poor treatment of animals by owners who are not actually violating any laws."

This is what the Raid Force had to say now in January of 2015:


"Sixty-nine dogs living in cages outside, under the radar?" he said. "I suspect that these dogs were all being bred for sale." MSPCA Public Relations Director Rob Halpin

69 again?  Why can't they get their story straight?  And what is this breeding under the radar charge?  The MSPCA knew they were there!  The MSCPA admits they visited them and as recently as 2013, found no violations of the law.  Ever wonder why an SCPA has a "Public Relations Director?"  Animal rights extremists and retail rescue con artists who make their living off of stolen dogs had a field day with this one.  They claim the breeder's home and kennel are a "traumatic environment."  Really?   They claim they are underweight and "matted" and the breeder's home was "dirty."  All subjective claims with no backing in the law.  If its a traumatic environment for them to live in a former boarding kennel, then why did the MSPCA say they were not violating the law in 2013?

Check this MSPCA photo out.  There are at least three dogs in the crate to the right.  If a dog breeder transported dogs like this, they'd be under arrest.  But when "rescue" does it, suddenly its all magical and good for the "poor babies." 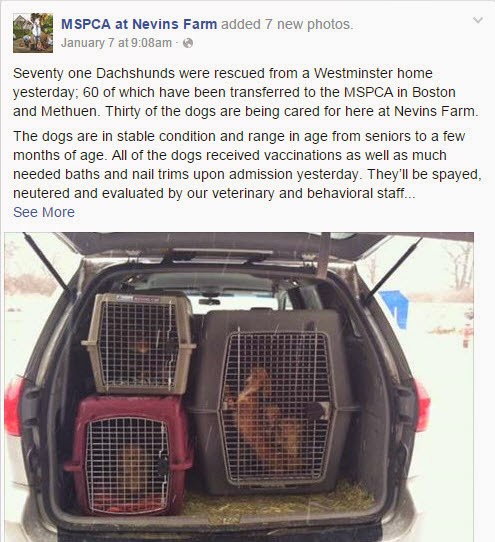 60 of the dogs were immediately shipped to Boston for resale.  11 stayed in Westminster at the 55 acre farm that was donated to the MSPCA.  Hundreds of people came out of the woodwork clamoring to buy one of these stolen dogs.   MSPCA of course is fundraising like no tomorrow off the situation.  At first they offered them for sale immediately.   Then after an uproar over how fast they were flipping the animals they have back tracked and now say they will be available in two weeks.

Turns out, even the activists admit that all of the dogs are "friendly and sociable."  Not abused at all.

MSPCA claims the animal owner "signed" over their dogs willingly.  Do you really believe that?   No animal owner faced with a group of armed thugs on their doorstep ever signs over anything willingly.   What normally happens in this case is that these thugs will threaten the owner with criminal charges unless they agree to give up their valuable property.  What the owner doesn't understand is... criminal charges are usually coming anyway.

Thanks to MSPCA and their allies, a shitstorm has hit the Internet defaming a family and their children, who has had no chance to defend themselves.  This story is everywhere and people who have fallen for the animal rights terrorist claptrap have contacted the authorities to buy one of these "rescued" dogs leaving the authorities to announce that they don't have enough dogs to public meet demand.  These dogs were never at risk.  They were never abused.  They were stolen under the color of law to meet a public demand for "rescued" Dachshunds.

Get that?  They are fundraising like no tomorrow off this case claiming they desperately need donations to "care" for these poor abused dogs... yet they can't bother to use the 100 million dollars they have in the bank? What was all that money donated for?  If not for the animals?  Why were 3 dogs crammed into a single crate (as shown above) if the MSPCA has over a hundred million dollars in assets?  If conditions were "dirty" as they claim, why not spend that hundred million dollars on helping the Aguiars' clean their kennel up?  Wouldn't that be the more humane thing to do?

Adding to the circle jerk of profiteers in this case is Mark Ransom. This article says that Mark Ransom who has a degree in the software industry is the animal control officer who took the dogs and then brought them to the Wachusett Animal Hospital. Sounds great right? Except Mark Ransom owns the Wachusett Animal Hospital. In fact, if you go on the Town of Westminster website, they actually link to his animal hospital giving his private business some sort of quasi-government approval.  In fact, this article claims that Mark Ransom approved the 2014 Cedarshake kennel license.

Even more interesting is that this was not an official police investigation.  The Westminster Police Department was not involved at all.  The MSPCA and Mark Ransom did this raid all on their own.  It appears that Massachusetts has fallen under the trap that New Jersey and other states have, that being, they have outsourced their animal control law enforcement authority to private vigilante groups.  992 people "liked" the original story on MSCPA's Facebook page and asked them to conduct more raids just like this one, raid more breeders, and charge them all with criminal charges.  Just imagine if these people get their way, there will be no more dog breeders in America.

A Concerned Citizen asked the Westminster PD about this case:
"This was not a Westminster Police investigation but we will try to answer your concerns. The MSPCA conducted an investigation concerning the health/wellness of the animals and the conditions of the kennel. There were no violations of the number of dogs due to a valid kennel license. I hope that answers your questions."

Amazing!  So they weren't "illegally breeding" after all, now were they?  To keep up the pressure, now the animal rights extremists have filed a complaint against the family with Child Services, a common tactic in these cases.

Now you may wonder why this article was titled, The Dog Fancy eats One of their Own. Turns out fellow dog breeder Lori Darling of Red Oak Dachshunds in Texas has been trying to get the Aguiars' raided for the past seven years and has been following them from their past home to this one.  Was she the "anonymous" tip? Amazing enough, this woman has only been involved in Dachshunds for eight years.  So just one year after she got her very first Dachshund she was already calling Animal Control and trying to set up a fellow breeder for a raid.  Nice gal.  With friends like that, who needs enemies?

Lori Darling sounds just like the poodle breeders who set me up for a raid in 2010 because they were jealous of my lines and pissed that I wouldn't sell them a dog and beat them in the show ring. It's a sad day when ego leads fellow dog breeders to sell out others and become puppets to animal rights terrorists.

Dog owners nation-wide are waking to the illegal raids of dog breeders and they are fighting mad.  Click here, to read a petition demanding the return of the Cedarshake dogs to their rightful owner, the Aguiar family.

Posted by Katharine Dokken at 12:09 PM