The Animal Debt Project in Wellington, Colorado was recently caught trying to sell off a deliberately stolen dog.  Police are investigating how a Westminster family's beloved dog suddenly went "missing" from their yard, part of a troubling avalanche of dogs being stolen out of their yards in America today and later surfaced at a local veterinary clinic.


The dog in question, Pepper, was permanently micro-chipped to prove its identity and legal ownership. A so-called "Good Samaritan" brought the dog to the Veterinary Specialty & Emergency Hospital (VRCC) for an exam. The pet hospital in Englewood, scanned the dog for a microchip, found it had one and then allowed the woman who was not the dog's legal owner according to the chip records, to simply take the dog away.


""She told me this lady brought her in and she did not want to wait for us to contact you so she went ahead and took her. I asked, 'Why was she able to take her? …She was in your possession when you scanned her,'" Naylor said.


Here's a question for local police.   If VRCC never got the woman's contact information, how did she pay for the exam at VRCC?   Unless she paid cash, then VRCC has a means of proving her identity through her payment information.   Thankfully for the Naylor family, local police continued to investigate this case and asked the public for help in locating the "Good Samaritan" who had the Naylor's dog but was refusing to return it and made up a bogus excuse that the dog had "escaped."  When a tip came in that this woman was connected to the Animal Debt Project who was marketing the dog for sale as "rescued," the story took an even more troubling twist.


""When we continued to look at (the suspect) through social media sites, we found she was associated with a rescue in Wellington," police Det. Cheri Spottke said."

When contacted by police to ask why they were selling a stolen dog, the owner of the Animal Debt Project cried uncle and immediately gave the dog to police. Then the story got worse. Much worse.


"It was a rescue as far as I knew. And the minute I found out it was potentially a stolen dog, within an hour, the dog was returned," said Edie Messick, the rescue's owner.

Retail Rescue in Colorado is a massive multi-million dollar scam business cashing in on American's gullibility and soft hearts.   Colorado has a huge shortfall of pets available for sale.   Determined to keep cashing in on this all tax-free scam, Colorado rescue's are importing tens of thousands of new animals into Colorado per year to sell off with fake sob stories attached to them.

The rescued animal trade in America has become so egregious that the state of Colorado is starting to crack down on these importers and demand accountability.   In turn, the Retail Rescue trade is fighting back to avoid having to publish their numbers, finances, sources of these animals and provide any sort of transparency to the public.

Massive import pipelines exist from third world countries in Asia, south America and other places that are now deliberately breeding dogs for the American Rescue Dog Business Model.   Shady rescues in the United States partner with these foreign groups to import hundreds of thousands of dogs (and now cats!) which are then washed through multiple American rescue groups and then shipped across state lines repeatedly to hide the true origin of the animal from the family who buys it after being told it was "in need" of saving.

"Animal shelters in the USA have been casting a wide net to fill their kennels for years.   According to the US Public Health Service, Chicago O’Hare was the destination airport for 10,125 dogs imported from overseas in 2006, half of which weren’t vaccinated. Scientists from the Center of Disease Control estimated that over 199,000 dogs (38,100 unvaccinated) came into the country through the Mexican border that year alone, and in 2007, one organization in Puerto Rico by itself shipped more than 14,000 strays in seven years to the United States for adoption at shelters.  ABC News reported that according to G. Gale Galland, veterinarian in the CDC’s Division of Global Migration and Quarantine, as many as 300,000 puppies a year – most from countries with little or no health safeguards, are being imported to satisfy the demand for puppies at shelters."

Earlier this year I covered this phenomenon with a three part series tracing the rise of Retail Rescue and updating the numbers imported.  The series started off by uncovering the hot new scam of "Turkish Golden Retrievers."  Thieves in Turkey are stealing hundreds of Golden Retrievers from Turkish families to ship to America as "rescued" dogs because the American rescue dog trade is so lucrative with almost no laws or regulations covering it.


"Dogs are in such short supply in America that rescues groups all over are scrabbling for product to keep their sales volume going and keep up the illusion that America still has a pet over-population problem.  Many rescues are jumping on the hot new Turkish Golden Retriever scam to keep the money flowing."

The second article in the series went into the current massive numbers of imported animals and how their origins are obscured from American families who "adopt" them and the massive rise in dog diseases in America, directly tied to these fraudulent rescued dogs.  The huge canine flu epidemic that swept America last year was brought here by rescues shipping in sick and diseased foreign dogs, produced cheaply, not health screened, and sold off for top dollar to gullible Americans.


"The rescue trade is so lucrative that new rescues are growing like weeds on every corner and byway of America. They exploit your hearts and wallets for all tax free profit using social media to push their business model."

In the third and concluding article, I provided proof that many shelters in America are absolutely empty and have NO animals available for sale.  In addition, dozens of rescues have been uncovered in just the last two years alone selling stolen dogs.  Even with selling off stolen dogs, importing hundreds of thousands more, these rescues still can't get enough product in to satisfy their desired sales volumes which has led to the rise in illegal raids of quality reputable American dog breeders.

A year ago, I covered the illegal raid of poodle breeder Sara Jane Tinker by Knoxville authorities in Tennessee and their links to the Young-Williams Animal Shelter that was completely empty and looking for product to sell off.  Widely slandered in the media as a "puppy mill" Tinker won her case proving she was no such thing.   Authorities dropped all charges, and were forced to give her all of her dogs back.   Tinker has now filed a federal civil rights lawsuit against animal control officer Frankie Byrne and Knox County, Tennessee who illegally raided her for no other reason than to gain product for sale.  Tinker's lawsuit states that animal control officer Frankie Byrne and Knox County committed "depravation of due process, malicious prosecution, abuse of process, and other violations of other State and Federal law."  Because of Frankie Byrne's illegal actions, Sara Jane lost her job, lost financing on her house, had her reputation destroyed across the Internet and was forced to pay not only legal fees and court costs but had to pay $1,700 to Young-Williams to get them to release her stolen dogs back to her.

"Even more tragic, tens of thousands of dogs are being stolen from their owner’s yards and shipped out of state to resell as somehow in need of rescue."

Many of the dogs shipped into Colorado as being in need of rescue have actually come from Mexico and were deliberately bred to be sold off as "rescues."   As for the "Animal Debt Project," found to be selling off a stolen dog, it's being run by Edie Messick, a wealthy former stock broker who has no education in animals.  In media articles Messick brags that she primarily sells off dogs through Facebook, giving owners no accountability or traceability for their new family pet but lots of cyber applause to stroke her ego as a "do-gooder."  As of today, the Animal Debt Project, run out of a post office box and an anonymous Gmail account, has failed to provide their IRS 990's which cannot be found on Guidestar.   They have no publicly reported financials as required by law.  What little can be found on them on the internet indicates that they claim to have zero income.  In this article from December, she claims to have 45 dogs for sale and on another page states she charges up to $500 each for dog, product that under IRS regulations is required reportable income.   When contacted by the media about the stolen dog in Messick's custody, veterinarian Chad Zadina claimed that Messick has sold "thousands of animals."   If so, where are her IRS 990's documenting these sales?   According to the Colorado Department of Agriculture's Pet Animal Care Facilities Act (PACFA) inspection program, as of May 13, 2016, the "Animal Debt Program" run by Edie Messick failed their inspection as required by Colorado law to be a lawful animal rescue.

"The Pet Animal Care Facilities Program is a model program for states across the country and is dedicated to protecting the health and well-being of those animals in pet care facilities. PACFA is committed to making sure that pet care facilities meet, or exceed, minimum standards for physical facilities; sanitation; ventilation; lighting; heating; cooling; humidity; spatial and enclosure requirements; nutrition; humane care; medical treatment; methods of operation and record keeping."

The time has come for Americans everywhere to stop supporting these fly-by-night rescues that have no past, no education in animals, just a website and a social media presence, selling off animals with either little or faked documentation.   If you want a new family pet, its time you turned back to the time proven quality source for animals, America's reputable pet breeders.  Unlike retail rescue which almost always gets a free pass, America's pet breeders are brutally and heavily regulated at the local, state, and federal level, forcing them to comply with thousands of pages of regulations in order to exist. 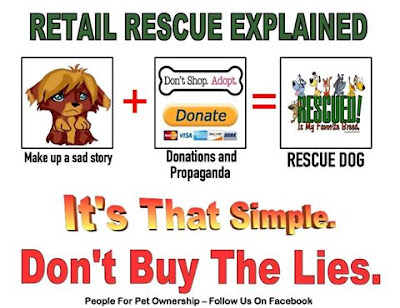 Posted by Katharine Dokken at 9:39 AM