News broke six days ago of a horrific truck crash in Idaho killing two people and dozens of dogs. From coast to coast people reacted with sadness and sympathy to this tragedy. 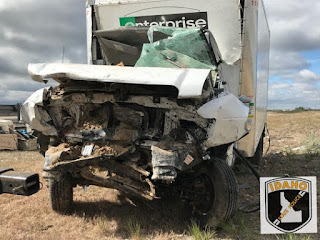 Do not let the sadness of the story detract you from the facts of this case. Ann Watson and boyfriend Christopher Kracht rented a Enterprise box truck and were illegally shipping what were largely Mexican dogs to Canada in brutal and cruel substandard transport runs for profit.  There was absolutely nothing legal or humane about stuffing 48 dogs into a Arizona box truck to heat stroke themselves to death.

Save your sadness for the dogs who spend their lives being a trafficked commodity in the billion dollar retail rescue trade and suffer terrible lives because of it.  Watson and Kracht weren't saving anything.  These 48 dogs were being transported to the notorious EJ's Rescue in Alberta, Canada (aka Dog E Daycare). A rescue with a long history of complaints reporting shady practices, sick and dead dogs and piles of filthy cash going somewhere.  A business that was prepared to accept 48 dogs at once. Imagine if your local shelter received 48 dogs in a single day. This shipment is just one view into the secretive and highly lucrative animal rescue trade in America.

It is illegal to ship dogs across multiple state lines in rented box trucks like this.  Ventilation is not the same thing as climate control.   Watson and Kracht may have had air conditioning (and heating in the winter) during these runs but the dogs in the back of the truck did not.  They were left to suffer alone in a cargo truck designed to move furniture not live animals.  Nor did they have the resources to stop and allow the 48 dogs out of the truck to go potty during that long cross country trip.  Instead they had to sit in their own filth.

Watson and her boyfriend Kracht had built up a persona as Pitbull rescuers saving dogs from dying in overcrowded Arizona shelters calling themselves Who Saved Who (aka Ann's Pet Services, LLC). The current illegal shipment was one of four they made to EJ's Rescue recently.  They had to know the dogs were going to a place with a dodgy reputation founded by a drug addict.   They claim that in just two years in business, they had personally resold 400 dogs and made these illegal transport runs shipping dogs to other dirty rescues.  Family members have stated to the media that Watson has 'saved' over 1,000 dogs in the past 10 years.   It sounds warm and fuzzy but that's 1,400 'adoption fees' that everyone is conveniently forgetting about.   They also claimed to be making two transport runs to Canada per month.  That's one every two weeks.   Let that one sink in.  Two people sold 400 dogs in two years and were making a minimum of three extensive illegal transport runs per month, two of which were to Canada and back.  Sales volume of that level is horrific.   Another question to ask yourself, where did the other dogs go?   If they were shipping dogs to Canada in cruel conditions every two weeks yet this was their 4th trip to EJ's, where were the other shipments going?   Media stories abound with sob stories about their combined six children left behind but who was caring for them when Watson and Kracht were driving back and forth to Canada every two weeks and other transport runs around the nation in-between?

"Most shelters in Arizona have an over-population problem, Nate Watson said. Shelters in Calgary often have the extra space, and Ann Watson would hand-deliver the dogs to Canadian shelters personally once or twice a month."  Family statement to the media.

Horse-hockey.  Many of these dogs originated in Mexico and many of them ended up in an even more dodgy place in Canada.  The founder of the Canadian 'rescue' John Murray admits to taking shipments of southern California dogs (also largely from Mexico) to the Canadian facility every single week for resale to Canadian families.   As for Watson's family, they have raised over $43K in just five days on a GoFundMe to 'pay for' support of the six orphaned children.  One of Watson's sons has stated he plans to take over his mother's business trafficking in dogs.

The Blackfoot Animal Shelter and Rescue recovered 21 surviving dogs from the truck crash site. They have announced that they still plan on shipping the survivors to Canada to keep the rescue gravy train running.   The "rescue" in Canada claims they have homes waiting for all of their shipments but a check of their own social media shows this to be a lie.

As for EJ's Rescue aka Dog E Daycare, a for-profit business in Alberta, Canada run by John Murray and his wife Trina Demeria where the shipment was headed, they have a long and contentious history.  Originally founded in California, Murray moved to Canada close to six years ago to take advantage of Canada's lax regulations over animal shelters.   The Canadian facility receives a never ending stream of transport runs to their 'day care' building to keep the wave of product coming in.

Check out what former workers have to say about EJ's.

A brief check of social media finds dozens of stories of people being sold sick dogs with fake histories and then ghosted by EJ's Rescue.  An amazing number of these stories involve both parvo (a deadly virus) and dogs with spinal disorders and paralysis.   It's simply impossible to track how many millions have flowed into their pockets.

Check out this nine year old online petition at Change.org, asking for help in stopping other horrifically cruel transport runs that John Murray (aka "English John") was running in the United States. 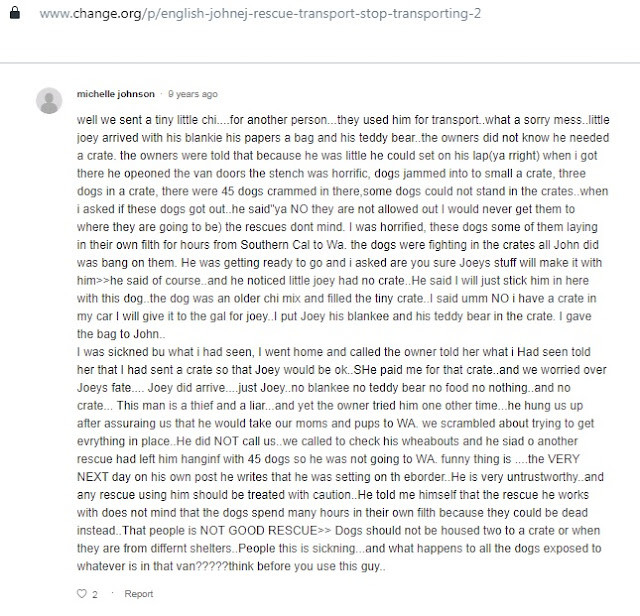 Murray, a former driver for Hollywood celebrities such as Charlie Sheen, bragged in 2014 that he personally was running transport shipments from California to his facility in Canada every single week.  You can find comments on social media regarding sick dogs in his transport runs and statements alleging that he was making these runs while drinking and high on cocaine.  While that can't be confirmed, Murray is an admitted drug addict.   In a sickening move, Murray won an award in 2014 for his animal trafficking business.


How about this story posted on Reddit almost a year ago where one of EJ's Rescues former foster homes was given a vicious dominant wolf-hybrid named Sabrina and lied to and told it was a 'husky mix.' The foster home says they reached out to Yamnuska Wolf Dog Sanctuary who verified that the dog they had was known to be a wolf-cross and that they had been trying to work with EJ's Rescue to place the animal in an appropriate situation but EJ's refused to work with them.


"Yesterday, a mother with two small children reached out to me saying she wanted to adopt, but was told by EJ Rescue to get me to not go to the media with this story otherwise they wouldn’t let her have Sabrina. Basically blackmailing me into shutting up so they can place her into a home that is completely unfit for this animal."


Apparently EJ's Rescue puts profit and their media persona above the lives of two small children.  Who in their right minds would sell a dominant vicious wolf-cross to completely unsuitable home and risk the lives of small children?  Their online reviews are no better. 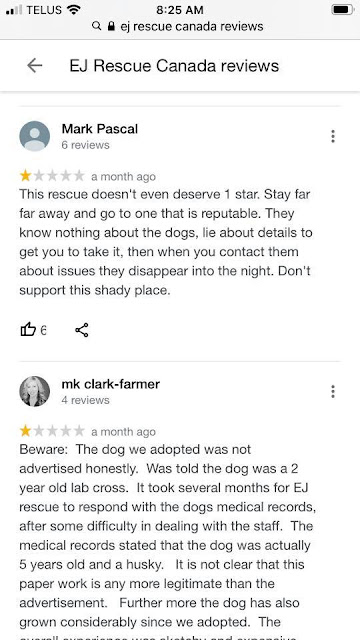 Various online reviews and social media posts are filled with horror stories such as:

"Albert" A foster home was given what they were told was a healthy four-year-old bully mix.  A vet examined him and determined that he was closer to 10 years old with a severe chronic spinal condition that would eventually paralyze both his back legs.  Volunteer's with EJ dispute the age and diagnosis of the dog even though he was gray haired, had old teeth, 'old man lungs' and a degenerative spine and demanded the dog be returned.  The foster home was reported to the authorizes to force them to return the dog so it can be resold to someone else.

Then there's "Chuck" sold off as a 12-week-old Mastiff Heeler mix.  When the family had the puppy examined by a veterinarian he was determined to be much younger with a faked vaccination history.  A short time later he was determined to have spinal lesions that were causing his back legs to atrophy as he grew.  Veterinary estimates ran as high as $9,000 for surgery with no guarantee that he wouldn't be completely paralyzed.  The owner stated Demeria never answered her again when she reported the puppy's condition. 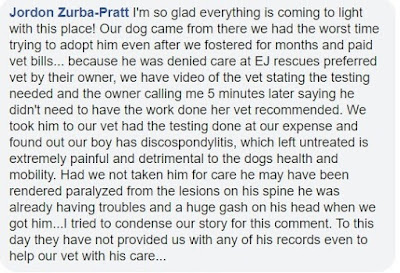 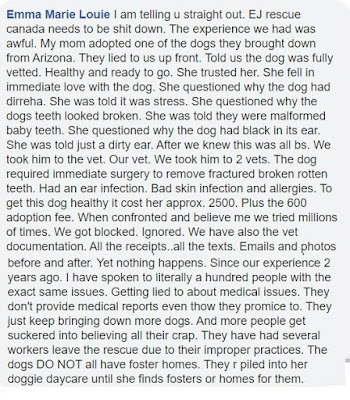 Besides reselling thousands of imported dogs, Murray and Demeria apparently also run multiple fundraisers to bring more cash into their business including as this Do Not Adopt (DNA) list claims:  having fellow drug addicts run fundraisers on their behalf such as Kelley Jean Desmond (aka Kelley Love:  multiple arrests for heroin possession, assault, driving on a suspended licence in Florida and Georgia) and then skimming off 'fees' for fundraising.

It is long past time that the United States Department of Agriculture cracked down on these inhumane animal rescue transporters who are constantly trucking animals around America to sell off to a gullible public for massive profit. EJ's is just one of thousands of front groups flooding Canada with foreign bred dogs by air and truck. One Calgary-based agency contacted by Maclean’s, Pawsitive Match Inc., says it trucked in about 800 dogs from the southwestern U.S. and Mexico in 2012 alone. America should not be a pipeline between the sick and diseased stray dogs of Mexico and new homes in Canada.   Those 48 dogs in that box truck deserve better.
Posted by Katharine Dokken at 12:18 PM