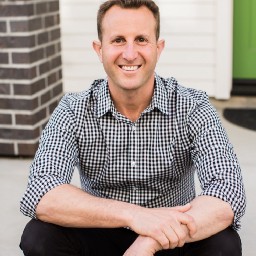 Shapiro started his career as an animal rights extremist in prep-school (paid for by his lawyer daddy) by founding a group he called Compassion Over Killing promoting a vegan diet. COK made a name for itself by framing farmers with highly edited and exploitative ‘undercover’ videos that activists would sit on for months or years until just the right political time came.   As with most of these activists, Shapiro has no documented education in animals. Just an ideological opposition to eating them based upon becoming a vegan at age 13.  Like many today, his feelings matter more than science.   His actual college degree is in "peace studies."  Another useless liberal degree.


While at COK, Shapiro was fond of protesting outside of fast food restaurants and on occasion, climbing up on their roofs.  Yeah, that's him below on the right protesting 'McMurder.' 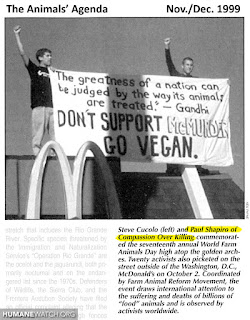 Shapiro has also volunteered with People for the Ethical Treatment of Animals (PETA). At a PETA protest outside one fast food restaurant, he carried a sign that said “The Meat Industry Equals Systematic Murder,” according to the Washington Post. As of 2003, he admitted to having been arrested a half-dozen times and having had to perform 40 hours of community service.

That's not all, COK, remember founded and run by Shapiro, used to frequently promote the Animal Liberation front (ALF) an domestic terrorism group under long term investigation by the FBI.   Besides promoting ALF activities, COK offered several ALF propaganda videos for sale.  By mailing money to COK, activists could get their own copies of these promotional ALF movies.

After 10 years at COK making a name for himself along with Josh Balk and Miyun Park, he was hired by the Humane Society for the United States (HSUS) to launch a new campaign aimed at putting farmers out of business. Joining them in 2005, as the senior director for their so-called 'factory farming' campaign eventually rising to Vice President.

In 2008, he was inducted into the Animal Rights Hall of Fame.  Instead like all of these activists, he belongs in the Hall of Shame.

By 2010, the complaints were piling up. Such as HSUS volunteer Ashley Rhinehart. Rhinehart met Shapiro at a talk he gave at Arizona State University, near where she was living. Shapiro made passes at her over the course of a couple of days, Rhinehart told POLITICO, “and filled me in on the fact he’s in an open relationship and that he was free to have sex with other people.”

Two days later, after she happened to see him at another vegan event, Shapiro asked Rhinehart, a 25-year-old registered nurse, to come to his car to examine a bottle of pain pills that had expired. He tried to kiss her, she said, and she turned her cheek. Shapiro went on to pressure Rhinehart to have sex for over a year. Starting in 2012 she was hired to work at the HSUS headquarters and almost immediately was targeted by predator Wayne Pacelle who kept trying to corner her alone in his office. When she reported his behavior Shapiro told her that Pacelle was also in an open relationship.

Every former employee who spoke with POLITICO said Shapiro had a habit of making sexual jokes in the office, and several remembered how he kept on his bookshelf a book called Sex at Dawn, about the flaws of monogamy. He openly discussed his philosophy of having many sexual partners with colleagues.

Still HSUS leadership covered it up. In 2015, Shapiro also emailed four male employees from his personal account a pornographic image of a man and woman having sex, according to a copy obtained by POLITICO. In another email, also from his personal account, he sent male employees an article about spider bites being a natural form of Viagra, the erectile dysfunction drug.

In September 2016 he was accused of sexually harassing a female HSUS staffer on a business trip to Boston. He told lewd jokes and walked around naked with a piece of clothing held in front of his penis. When she returned to the office she joined five other women in reporting him to human resources for sexual harassment.

“The women said Shapiro, the vice president of Farm Animal Protection, asked them to have sex and told lewd jokes in the office, according to a POLITICO investigation based on new interviews with seven current and former employees, including four of the women who filed the complaint. According to interviews, emails and an internal document reviewed by POLITICO, Shapiro suggested a female employee should “take one for the team” by having sex with a donor, sent pornography and lewd emails to male employees and discussed with colleagues his sexual philosophies, such as having as many sexual partners as possible. His alleged behavior, staffers say, led to the resignations of no fewer than five employees from 2015 to late 2017.”

Instead of being disciplined, the good ol’ boys at HSUS gave him a lateral promotion. Shapiro denies it and claims the new position had less responsibility but, in either case, his behavior was covered up and he was allowed to remain on the payroll for another 16 months until head honcho Wayne Pacelle was caught in a sexual harassment scandal of his own revealing that objectifying women is pretty much institutionalized at HSUS. Nothing shows this more than when Pacelle hired Scotlund Haisley, a long time heroin junkie who only worked in the animal rescue field in his words, because it gave him better lap dances from strippers.

HSUS VP Paul Shapiro resigned in January 2018. He was allowed to leave on his own terms despite numerous women having accused him of toxic behavior.  It appears he didn't learn anything in college when he was studying 'peace studies.'

Today Shapiro has reinvented his image yet again as the author of a book promoting plant based alternatives to meat, giving TEDx speeches and founding The Better Meat Co.

Posted by Katharine Dokken at 6:06 AM

Email ThisBlogThis!Share to TwitterShare to FacebookShare to Pinterest
Labels: ALF, Animal Rights Hall of Shame, Center for Science in the Public Interest, Compassion Over Killing, HSUS, Paul Shapiro, PETA, The Fund For Animals