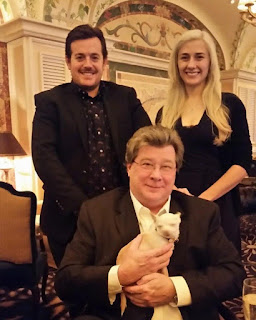 Wills, whose criminal convictions date back to 1973 for breaking and entering, was formerly the head of the Nashua Humane Society in New Hampshire.

Wills admits he faked his resume from 1979, listing journalism degrees from the University of Maryland that he never got. Although he received a bachelor's degree in philosophy from the University of Michigan in 1984, Wills said, he'd earlier doctored his academic record to mask time he spent in jail and on probation on a 1973 burglary conviction in Charlottesville, Virginia.

Long time Humane Society of the United States (HSUS) president John Hoyt recommended Wills for the position heading up the Nashua Humane Society.  Wills took a quick exit in 1979 when money was found missing from their accounts.  His pal Hoyt quickly found him a new job as the executive director at the Michigan Humane Society.  Wills lasted there 10 years before the board began noticing that over $1.6 million dollars was missing from their accounts.  The animal rescue and shelter system in American is blindingly wealthy.   It took the loss of almost $2 million dollars before the board noticed anything was wrong.  A low level bookkeeper was made a scapegoat and was convicted of stealing $56,000.  The rest was never found while Wills whined that he was the victim and someone was 'forging' his signature.

Wills quickly moved on and founded a group named the National Society for Animal Protection (NSAP) and started fundraising from his wealthy connections made at his former two positions.   His group lasted less than two years ending in 1991 before he was hired to take over as the vice president for investigations at HSUS.  Wills was sued twice by William and Judith McBride of Ortonville, Michigan and Sandra LeBost of Royal Oak, Michigan for not repaying money they had given him to launch his new short lived group.    At each prior job he was accused of embezzling money but the good ol' boys at HSUS protect their own.   They covered it up and hired him to head up 'investigations.'   Typical ironic move by the criminals in the animal rescue field.


Sandra LeBost of Royal Oak, Michigan, in June 1995 won a $42,500 judgment against Wills for non-repayment of loans made to help him start NSAP. She was never able to collect the money.


Wills lasted just four years at HSUS until he was sued in 1995 for sexually harassing and assaulting as many as 13 female employees.   The lawsuit was ultimately settled out of court.  Just weeks before he was fired, John Hoyt and Paul Irwin, sadly both former ministers, resided over Wills' lavish Mexican wedding to Laurie White, the former wife of PETA president Alex Pacheco.  Besides other charges, board members questioned why HSUS funds were used to pay for the wedding and to cover Wills debts from previous failed businesses.  Wills then filed for bankruptcy to protect him from the allegations of misusing money, to get out of having to lay the two Michigan legal settlements and to avoid paying a paternity judgement against him in Washington state.

Washington lawyer Lynne Bernabei delivered a 21-page letter to Hoyt and Irwin on behalf of Virginia Bollinger, an animal cruelty investigator, and Cristobel Block, a legal investigator. The letter, included in court files, paints a lurid picture of unwanted sexual overtures that Wills allegedly made over a two-year period starting in 1993, from kissing and offensive comments to, in Bollinger’s case, nonconsensual sex while she and Wills were traveling on assignment.


Cristobel "Kitty" Block rose to the position of HSUS president after former president Wayne Pacelle was forced to resign in 2018 after serial sexual harassment charges were made against him.   HSUS has a long history of sheltering convicted felons and sex perverts.   Pacelle was recruited to HSUS by David Wills.   Block is a former employee of the dog killers of PETA.  Every time one of these con artists is exposed, they just move on to a different group with another whitewash of their background.

Court records show that Wills denied sexually harassing anyone but admitted to commenting on the appearance of female employees, having sex with subordinates (other than Block), telling women at work he was the “predator, not the prey” while pursuing romantic relationships with them and using Humane Society funds to pay prostitutes.

A fondness for prostitutes is common in the animal 'rescue' field, just look at dirt bag and fellow ex-HSUS alumni Scotlund Haisley.  The law finally started catching up to Wills once again when he was arrested in Maryland.

In June 1999 Wills pleaded guilty to one count of embezzling $18,900 from HSUS between 1990 and mid-1995. Wills agreed to pay restitution of $67,800 to HSUS, and accepted a six-month jail sentence. HSUS and the State of Maryland agreed to drop six other counts of embezzlement, alleging thefts of $84,128.

Since 2015, Wills has been fighting federal sex trafficking charges for his alleged long term sexual assaults of a 9-year old girl in various locations in Texas.

"Wills and Losoya are both accused of sexually assaulting a 9-year-old girl in Brownsville, starting in 2012. When Wills moved to Rockport, the indictment states, Losoya would visit him with the girl so he could continue sexually assaulting her for money."

Lasoya pled guilty to selling her nine year old daughter to David Wills for sex in 2017 while at the same time he wrote and released a self-aggrandizing book on his 'career' in the animal rescue world.

“Losoya appeared before U.S. Magistrate Judge B. Janice Ellington and admitted she was responsible for the continued sexual assault of her daughter which began in Brownsville in 2012,” reported John Morgan, then editor of the apparently now defunct Coastal Bend Chronicle. “Later, she traveled with the victim so that the attacks could continue. She further admitted that she did so in exchange for money. Prosecutors say Wills paid Lasoya to have sex with her daughter over the course of several years,” starting when she was nine years old.

As for Wills, he's currently out of jail, released on a $5 million dollar bail. Let that fact sink in the next time you are tempted to open your wallet at some sob story an animal rescue is promoting. Think of a man who worked his entire life in various humane societies amassing enough money to pay a $5 million dollar bond and afford enough high powered legal help that he's been able to avoid trial for 4 years while he plays around on his Twitter account.

The multi-time postponed trial of former humane society executive David Keith Wills on a federal charge of allegedly trafficking a minor for sexual purposes has yet again been rescheduled. Wills is now set for trial in September 2019.

October 8, 2019, Wills is found guilty by a federal jury of long term sex trafficking of a child.

He was taken into custody is now waiting for sentencing.

Posted by Katharine Dokken at 10:08 AM