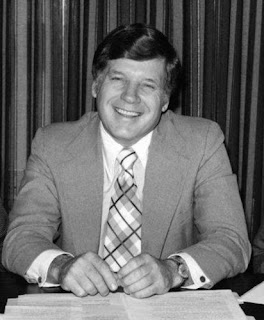 John Hoyt is responsible for shaping the Humane Society of the United States (HSUS) into the monster it is today. He both expanded its goal to outlaw all human-animal interaction but also set the corporate culture of serial sexual harassment. Most American’s still view HSUS has some sort of umbrella animal sheltering group and regularly donate their hard earn money believing animals are being saved. They have no idea that like most national charities, the HSUS is just a powerful slush fund for fringe activists and doesn’t provide any hands-on care of cats or dogs.

Hoyt started his career as a Baptist minister, later moving on to the Presbyterian church.  He called the animal rights movement, a ‘church’ just like the ones he had left. Just like most activists in the animal rights field, Hoyt had no education in animals. Just a desire to turn his back on God and ignore the teachings of the bible, turning animals into a cult to be worshiped with rights above humans.

Hoyt didn't just turn the HSUS into a multi-million dollar cult. He is most famous for living high on the hog at donors’ expense and filling many high level HSUS positions with sexual predators and other garden variety con artists. Hoyt was HSUS’s president and CEO from 1970 to 1996. He took a half a million-dollar charity without much name recognition and turned it into a $50 million-dollar power player. HSUS also diversified itself in this period absorbing other animal rights groups and opening numerous state offices and other affiliates. But all wasn't quiet at the HSUS home front.

In response to growing outrage at the tremendous financial (and sexual) abuses taking place in HSUS, the board formed a ‘Deferred Compensation Committee” in 1983. The committee was formed to simply rubber-stamp Hoyt’s financial abuses and declare them righteous. Such as.

HSUS bought Hoyt’s Germantown, Maryland home from him in 1987 for over $300,000 and then allowed him to continue living there rent-free until 1992. Another funny accounting trick revealed that Hoyt was collecting money from a shell corporation owned by HSUS called the National Humane Education Center (NHEC). NHEC hadn’t operated since the 1970’s but mysteriously a bank account was opened in 1984 with a river of money flowing through it that somehow ended up with Hoyt.

These weren’t the only hidden perks that Hoyt was collecting while riding the gravy train. When his right hand wasn’t paying his left hand and subsidizing his wife’s overseas travel, he was engaging in shady transactions to hook HSUS treasurer Paul Irwin up to the gravy train. Hoyt personally signed many of the checks that funneled extra off-book cash to Irwin.  (more on Irwin in another article)  Hoyt also personally hired convicted pedophile David Wills to join the HSUS mother ship in 1990.

Wills landed the presidency of the New Hampshire Humane Society in 1972 when he was only 19, the youngest person ever to head a major humane society. He got the job with Hoyt’s recommendation, a fabricated resume with a non-existent master’s degree in journalism, and a manufactured background with the Washington (DC) Humane Society. He left six years later amid accusations he stole funds, with estimates ranging from $10,000 to $2 million.

In all Hoyt spent over 20 years finding Wills one job after another in the animal rights field.   Each time glossing over his predator background, before bringing him to HSUS itself.


Internal Humane Society documents show that, in 1982, Hoyt received a $100,000 interest-free loan from one board member, Irene Evans, and that another, Regina Frankenberg, paid for overseas travel for his wife for several years. Court records in the District show that in 1991 Evans left jewelry worth more than $1,200 to Hoyt's daughters in her estate.

Fairfax County Probate Court records show that Irwin collected a $15,000 fee in February for serving as an executor of the will of Viola Weber, another board member. All three women are deceased.

The society in the past also bought a home for Hoyt, paid for renovations at a cabin used by Irwin and supplemented their salaries with money identified as "payments to annuitants" made through groups affiliated with the society.

It comes as no surprise that Hoyt didn’t mention any of the uncovered hidden payments in his 1988 “HSUS Report of the President.” In the same year a group of HSUS board members contacted the Washington, DC law firm Harmon & Weiss and hired them to investigate the financial irregularities of Hoyt and Irwin.  When confronted with his activities Hoyt simply declared that as a minister he is used the church providing him with free housing and HSUS should simply do the same.

At the same time as Hoyt was living in donor paid housing and keeping his hand in the cookie jar, HSUS was launching new campaigns such as their 1988, “Breakfast of Cruelty” campaign.

"Behind virtually every slice of bacon and every innocuous looking egg lurks a long, hidden history of unbearable suffering." HSUS.

In his “1991 Report of the President,” Hoyt would later brag about demolishing HSUS’s relationship with local humane societies, in favor of a more centralized power structure that left all the money in Washington, DC.

The previous year Hoyt started spay/neuter campaigns that blamed American dog breeders for animals being euthanized in shelters. For the next several years, HSUS ran constant campaigns blaming all of America’s animal shelter problems on breeders instead of putting the blame where it belongs. The inept or corrupt shelter management and owners who dump their animals. Less than 5% of dogs in shelters came from breeders or pet stores.

Irwin held a press conference in 1993 attempting to push to outlaw all pet breeding in America. While new upcoming protegee Wayne Pacelle issued his famous quote that he doesn’t want to see another dog or cat born.  It was ironic that Hoyt started the campaign to outlaw dog breeding in America at the same time as he put into place an HSUS policy to reject any relationship to local pet shelters.   He wanted all the money right in Washington, DC, in easy reach of his and Irwin's sticky fingers. 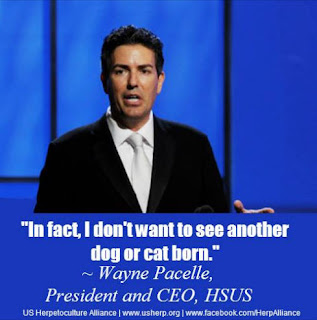 In a 1993 letter published by the American Society for Microbiology, Dr. Patrick Cleveland of the University of California San Diego spelled out HSUS’s place in the animal-rights pantheon. "What separates the HSUS from other animal rights groups,” Cleveland wrote, “is not their philosophy of animal rights and goal of abolishing the use of animals in research, but the tactics and timetable for that abolition.” Cleveland likened it to the difference between a mugger and a con man. “They each will rob you — they use different tactics, have different timetables, but the result is the same. The con man may even criticize the mugger for using confrontational tactics and giving all thieves a bad name, but your money is still taken.”

Flash forward to 1994 and Hoyt was still writing positive performance appraisals of his protégé David Wills even though his faked resume, criminal background and numerous embezzling allegations and lawsuits had surfaced again.  When Hoyt was confronted with David Will’s past he shrugged it all off as ‘very ancient history.’  Critics at the time had no idea the extent of how much Hoyt had been supporting Wills and finding him jobs for the previous 20 years.   Wills was finally convicted of pedophilia charges in 2019.

Last August, Washington lawyer Lynne Bernabei delivered a 21-page letter to Hoyt and Irwin on behalf of Virginia Bollinger, an animal cruelty investigator, and Cristobel Block, a legal investigator. The letter, included in court files, paints a lurid picture of unwanted sexual overtures that Wills allegedly made over a two-year period starting in 1993, from kissing and offensive comments to, in Bollinger's case, nonconsensual sex while she and Wills were traveling on assignment.

Wills was finally forced out at the HSUS in 1995, not for his serial sexual predator behavior but because he simply cheated too much on his expense reports. He billed for expensive dinners for people who did not exist and fabricated numerous fake informant payments.

The shenanigans of Hoyt, Irwin and Wills finally became too much for the HSUS’ board to continue damage control. In 1995 board members started a movement to prosecute Wills for embezzlement and to terminate Paul Irwin and John Hoyt. The icing on the cake for the trio was a lawsuit filed against HSUS by the Humane Society of Canada.

Yet the society's troubles lately seem to be multiplying. On July 9, Hoyt received notice of a lawsuit filed in Toronto by the Humane Society of Canada, a group the U.S. society regards as an affiliate. That lawsuit asserts that Hoyt and Irwin, among others, transferred $1 million from the Canadian group's bank account to the U.S. organization without authorization. The suit goes on to claim that the U.S. group took the Canadians' donor list and grossly overcharged for administrative costs and overhead.

The head of the Canadian group, Michael O'Sullivan, said he regards himself as a friend of Wills, who is a godfather to one of O'Sullivan's children. O'Sullivan declined to comment on the lawsuit. Roger Kindler, general counsel for the Humane Society of the United States, also declined to comment except to say, "We will defend the suit fully." 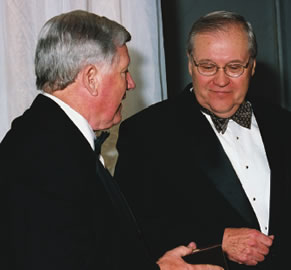 Hoyt retired in 1996 with a nice fat golden parachute (rumored at $1 million), but remained in charge of the HSUS controlled Interfaith Council for the Protection of Animals and Nature.   He died in 2012.  A wealthy power broker to the end.
Posted by Katharine Dokken at 6:09 AM