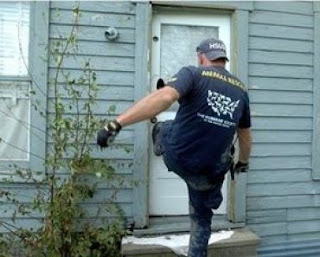 Scotlund Haisley like the majority of animal rights activists has no documented education in animals. Besides dropping out of high school, this heroin junkie couldn't even read until he was an adult. Like many criminals, he went to work in the 'animal rescue' field for a living.   He started working in animal shelters in Washington, DC, New York City, California and even took a turn with PETA. He had aspirations of stardom that working for a living just wasn't providing him.  He didn't want to clean up after and take care of animals, he wanted stardom, money, prostitutes and drugs.   Cocaine and heroin were his favorites.

He was quickly hired by pal and fellow sex predator Wayne Pacelle to join the Humane Society of the United States (HSUS) running an illegal private SWAT team. HSUS calls it "Emergency Services." Fine words from a vegan lobbyist group that doesn't run any pet shelters in America. After numerous raids of law abiding animal owners, the lawsuits started piling up. The first was Normal Pang of Hawaii. Falsely accused of animal abuse and labeled a hoarder by the media, Pang sued HSUS and Haisley in 2009. The Pang lawsuit exposed that Haisley was the one who developed the fake law enforcement looking badges that Haisley had the HSUS raid teams wearing.

“I want the scum to think we are law enforcement,” Graves said Haisley told them.  Graves and Schwartz then took their concern to then-Humane Society of the U.S. president Wayne Pacelle.  “I like the cowboy ways that Scotlund brings to the team,” Graves said Pacelle responded.

“HHS [the Hawaiian Humane Society] and HSUS both launched a
media campaign of vilification against [Pang], accusing him of animal
abuse and neglect and other unsupportable acts of criminal conduct." 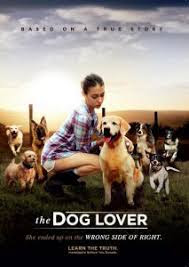 Next Haisley led the illegal HSUS raid of Dan Christensen in South Dakota. His goal was to shut down and destroy a highly regarded hunting dog kennel. Dan Christensen fought back and proved that the search warrant was illegal and he had done nothing wrong. As is typical in these cases, the 'rescuers' actually killed 28 of Christensen's dogs through their inept and incompetent care. Christensen sued HSUS and Scotlund Haisley for $5 million dollars.

As part of the Christensen lawsuit an email from Meredith Shields resigning from HSUS came to light in which she stated, “Mr. Haisley told an employee of the Department to wear an HSUS t-shirt to a strip club while on deployment because “you’ll get better lap dances.”” The Christensen case was so egregious that Forrest Lucas of Lucas Oil financed a movie about the case and others like it where innocent American dog breeders have been targeted and framed.

In September of 2010, one year from the date of the illegal raid
that changed his life forever and destroyed his hunting dog kennel, Dan filed a $5 million dollar federal lawsuit against Second Chance Rescue, HSUS, Scotlund Haisley, Turner County, and the County Sheriff for going along with it all. Dan sued for the deprivation of his Fourth, Fifth and Fourteenth Amendment rights, malicious prosecution, emotional distress, criminal trespass, and intentional damage to private property. The Art of Terror: Inside the Animal Rights Movement. 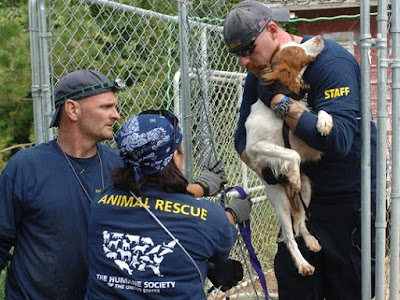 Here's a picture from the illegal Christensen raid.  Look how clean and healthy the dog looks.  The white parts of its coat are almost spotless.  The lawsuit revealed a number of hidden facts about the HSUS raid team from the mass resignations from those who didn't want to work for a drug addict to discoveries of his sex pervert ways.    After the lawsuits and controversies started piling up over HSUS's raids, he moved over to leading In Defense of Animals (IDA), lasting there less than a year.

Haisley then capitalized on his base of cult followers to form his own private vigilante force known as the Animal Rescue Corps (ARC). ARC was initially financed by Ady Gil, the same animal rights activist who gave a pile of money to the Sea Shepherd Society.  Haisley specialized in targeting the poor and the elderly for destruction. The media couldn't get enough of this dirt bag. He was labeled a hero and reporters fawned at his every word. 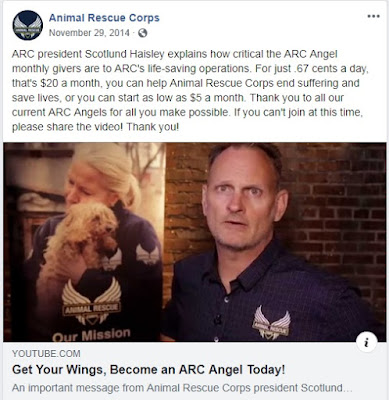 Even when his drug use was front and center, reporters lapped it up.  When this heroin junkie was violently sick in front of a reporter in Nashville, Tennessee, he played a victim card and claimed the 'ammonia fumes' were slowing killing him.


Conditions on a breeder's property during an animal rescue operation near Nashville were so toxic that the leader of the rescue team nearly died from ammonia poisoning.  ABC News 5, April 19, 2018.

Local reporters gushed that he was suffering from these toxic environments these elderly animal abusers were living in and gee whiz!  This hero almost died and had to have a blood transfusion to live!   Let's think about this shall we?  Not one reporter in Nashville spent one moment asking why their vulnerable elderly were living in a supposedly toxic environment that almost killed a man 30 years their junior.   Why is that?  Why was an out of town junkie's word taken over that of their local residents?   Why didn't anyone spend 30 seconds on Doctor Google to find out that a blood transfusion is not any recognized treatment for breathing in ammonia fumes.

After terrorizing Americans across this nation in many southern states, South Dakota, Iowa, Hawaii and others, he was finally ousted at ARC in September 2018. Not because he was a drug addict and criminal. Oh no! He was thrown out for embezzling money from what already is a con to start with. He wasn't sharing the wealth but was taking too much for himself!  His $100,000 salary just wasn't enough to support a wife and three kids with prostitutes and drugs on the side.

In typical Haisley style he told an unquestioning media and his tens of thousands of cult followers that he was retiring 'for his health' because raiding animal breeders had put him in liver failure.  Dozens of sob stories followed along with GoFundMe campaigns to put more money in Haisley's pocket.

Funny enough, I don't know a single animal breeder who has ever died from liver failure - caused by their breeding animals.

After leaving ARC, he was quickly arrested in Maryland for domestic battery. Turns out besides being an adrenaline junkie who terrorizes the elderly for kicks, he likes to beat up his wife!   Who's shocked by this?


According to the arrest report, complainant Lynne Haisley, wife of Scotlund Haisley for 16 years and mother of their three minor children, told responding police officers that Haisley “struck her approximately five times with a closed fist. Then he grabbed her by the neck, and began choking her. Ms. Haisley could not recall if he used one or two hands to choke her. Ms. Haisley estimated that her husband choked her for 30-60 seconds.

His arrests in Maryland for domestic battery and violating the subsequent protective orders were quickly followed by an arrest in Washington, DC for two armed robberies of the same Subway store. Yep, armed robbery!  He held a gun to the back of an employee's head to steal $300.

His past decades of being a sheriff's darling and leading private vigilante SWAT teams is over.  At the end of 2019 he was sentenced to 46 months in prison for armed robbery.  I'm sure once he's released he'll start a new career as a misunderstood 'artist' like convicted university bomber Rodney Coronado.   Why not?  After all, when it comes to animals, Americans have proven they are pretty gullible.   As for the media, 'animal abuse' stories are a proven money maker.  They could care less that most of their stories are lies from start to finish. 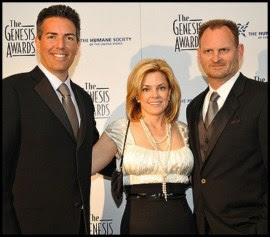 Posted by Katharine Dokken at 9:45 AM