Another animal rights terrorist that fits the profile to a 'T' is Walter Bond.  Bond goes by numerous names.  Bond has no documented education in animals.  In interviews, he claims to have dropped out of school in the 8th grade.  Bond claims he has committed his crimes due to his love of animals but he has no known history of connection to animals.  He just loves fire.   Saying he loves animals gives him moral cover that he doesn't deserve.

Bond started his career as an arsonist in Mason City, Iowa back in 1996.   He was convicted of criminal mischief and trespassing when he tried to torch a church.  A year later he was caught setting fire to a house that killed the dog inside.   He was convicted of second-degree arson and sentenced to 10 years in prison.  He served three and was released in May 2001.

These days more schooled in how to generate sympathy from his unquestioning followers, he claims the house he torched containing the dog he killed was a 'meth lab' and therefore he was justified in his acts.  He claims it was an act of vigilante justice and he personally shut down the largest meth lab in Iowa.  As if burning down something explosive is the best way to handle the situation?  What about the danger to the neighborhood if his story is true?  Let alone this doesn't explain his prior arson attempt at a church.

After his release from prison he underground for a number of years before resurfacing in 2010 with another string of violent arson fires.  In April, he set fire to the Sheepskin Factory store in Glendale, Colorado.  The arson destroyed the business and caused $500,000 in damages.  He vowed to return in a couple of years and torch it again.

"According to a federal arrest affidavit, a security camera captured images of a shadowy figure wearing a dark-hooded, long-sleeved shirt and carrying a backpack outside the Sheepskin Factory about 3:15 a.m. April 30 — just minutes before a massive fire broke out at the building."

In June he torched the Tandy Leather Factory store in Salt Lake City, Utah causing $20,000 in damages.  Just like his prior fires, he vowed to return and torch the Tandy store again.   In July he burned down the Tiburon Fine Dining restaurant, known for serving wild game, in Sandy, Utah causing $500,000 in damage.  He claimed responsibility for both on ALF websites.  He claims to have targeted these businesses because they represent animals that wolves would hunt in keeping with his 'Lone Wolf' alias. 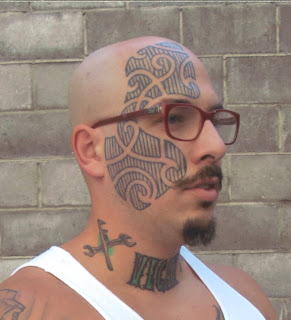 "The arson at the Sheepskin Factory in Denver was done in defense and retaliation for all the innocent animals that have died cruelly at the hands of human oppressors. Be warned that making a living from the use and abuse of animals will not be tolerated. Also be warned that leather is every bit as evil as fur. As demonstrated in my recent arson against the Leather Factory in Salt Lake City. Go vegan! -- ALF Lone Wolf."

Bond didn't give a damn that he killed a dog in 1997 that died a terrible death in an arson fire but now in 2010 he claims to be acting for them.  Right!  Bond wasn't hard to find.  He boast on social media of his successful 'advocacy' and admitted to his crimes to various associates.  Then of course there is his bizarre appearance and known arson history.  A two-year-old could have put together the connection.

When arrested he had a book in his possession with the long title of, "The Declaration of War - Killing People to Save the Animals and the Environment."

Bond accepted a plea deal in the Colorado case.  The charging documents stated that he used 'fire or explosives to damage property involved in interstate commerce.'  He was sentenced to five more years in federal prison.   He was ordered to pay $1,17 million in restitution.   He received another slap on the wrist in Utah and was sentenced to 7 years for destroying three businesses.  Given his previous history as an arsonist, these are insanely short sentences.   He was also convicted of one count of violating the Animal Enterprise Terrorism Act (AETA).

At his hearing in Colorado Bond said he was honored to be a prisoner of war in the fight against "inter-species slavery."  He told the judge he had no remorse for his crimes.

The judge noted sarcastically that Bond just sets fires because that's his way of acting out when he doesn't get his way.   It should also be noted that while he has an ugly graphic 'Vegan' tattoo on his head, he is known for loving hamburgers.  Witnesses claim he indulged in two of them the day before he was arrested.

As a condition of Bond's eventual release, the court ordered he have no "association with the Animal Liberation Front or any member either in person, by mail, by phone, by email by third person or by any other method." 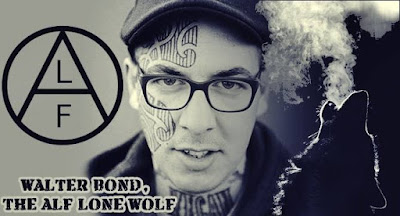 Bond spent the first part of his sentences at the federal prison in Marion, Illinois.   Housed there from 2012 to 2015, he changed his name to Abdul Haqq, claiming its his 'religious name' while he is a prisoner of war.   Bond remains defiant to this day, spending his time in prison giving interviews and publishing articles.  He's currently imprisoned in Indiana until his scheduled release in 2021.

It should not surprise you that his fellow terrorist network maintains a "Support Walter Bond" website to this day.  This anarchist is considered to be a hero among animal rights activists.

Posted by Katharine Dokken at 3:03 PM