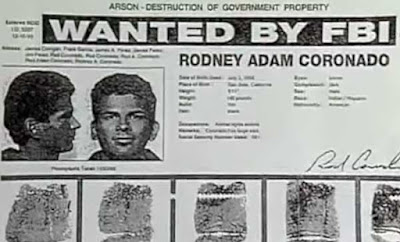 Rodney Adam Coronado, like the majority of animal rights activists has no education in animals.  He's just an anarchist looking for fame and glory.   The animal rights field gives that in spades.  Coronado is a worldwide celebrity.

He started out as a pirate joining the Sea Shepherd Conservation Society back in the mid-80's as a teenager.  The terrorists of Sea Shepherd are famous for ramming and sinking fishing ships.   Their boats are fitted with water cannons, a concrete filled bow to help them 'ram' other boats and an attachment labeled the 'can opener' to help them tear open ship hulls.  Sporting skull and cross bones flags, anarchists like Coronado and his pal Paul Watson have made a career out of terrorizing other nations because they disagree with fishing of whales.   There is nothing cruel or inhumane about fishing for whales.  Whales are nothing more than a really big fish.  Fishing for whale is no different than fishing for salmon.   Whales just feed a lot more people.
With Watson's support Coronado executed an attack to ram and sink two fishing boats and destroy a processing facility causing $2 million in damages.  The operation was successful and on November 9, 1986 he and a fellow terrorist sank half of Iceland's whaling fleet.

After boasting about the operation in the Animal Liberation Front (ALF) publication, No Compromise, he was arrested in Canada and jumped bail.  Coronado then turned to fire for fun and kicks, by burning down a university research lab in Michigan, a farm at Oregon State University and broke into more than one farm to steal animals and 'set them free.'

From middle to late 1991, he attacked Oregon State University and five other sites, including private farms and other research facilities.   The attacks ranged from vandalism to firebombing.  One attack completely destroyed a farm in Yamhill, Oregon.

In 1992 he firebombed a laboratory at Michigan State University.  The explosion and resulting blaze destroyed three decades of medical research turning it into ash, some of it previously unpublished and now lost forever.   The fire caused more than $1 million in damages.  The ALF immediately claimed credit for the fire.   Coronado was quickly suspected since the FBI already suspected he was behind a number of other arson attacks.   What Coronado didn't know is that the FBI had finally decided to go after these domestic terrorists and had launched "Operation Bite Back."

He wiggled his way through a first-floor window of Anthony Hall before kicking down the door to the office of Richard Aulerich. The MSU researcher spent decades studying nutrition and the decline of the natural mink population. Coronado believed Aulerich's research was funded by the commercial fur industry.

Inside Aulerich's office, Coronado built a pyre using wooden desk drawers, research papers and a makeshift firebomb. He recorded his actions on video, donning a mask to protect his identity.
Coronado set the timer on his makeshift bomb before walking out. He had confidence in his work; he'd perfected the technique while carrying out half a dozen prior attacks against other universities and fur farms on behalf of the Animal Liberation Front.

At the time his bomb went off, the building was filled with students.  Luckily they all managed to get out and no one was harmed.  While firefighters were attempting to put the blaze out, Coronado and other terrorists were overwhelming University fax lines by sending an avalanche of animal rights propaganda to University machines, clogging and shutting down the phone lines. 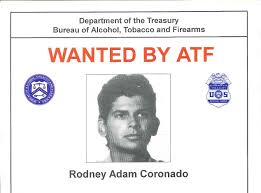 He went on the run and spent two years hiding on a series of Indian reservations under aliases such as 'Leonard Robideau.'  First at Standing Rock Sioux in South Dakota before ending up in Arizona while the FBI searched for him.  Finally caught, he plead guilty to arson in a deal to have other charges against him dropped and was sentenced to almost five years in prison.    Even then, at one point, he attempted to flee while handcuffed.

During the fight, his support committee received a check for over $70,000 from PETA while he played one victim card after another.  He claimed he was innocent.  He claimed to have simply been in the area.  He claimed his First Amendment rights and stated he was just a 'spokesman' for ALF.

Like many convicted felons in the animal rights field, he's now a sought after public speaker and author.   From at least 2002 until his arrest in 2006, under the guise of the First Amendment, he advocated violence against various targets including during a 60 minutes interview. 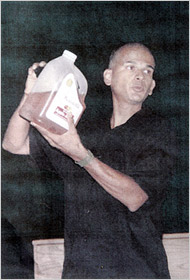 In 2002 in one of his public speaking events, he bragged that he was responsible for at least six other arsons.   In January 2003 during a speech at Washington, DC's American University, he demonstrated how to built a firebomb to university students.    During an August speech in San Diego held 15 hours after a $50 million dollar eco-terrorist caused arson fire at a condominium project nearby, he stated that fire is a cleansing force.  When an audience member asked him about it, Coronado stated, “I wouldn’t be surprised if investigators found a device similar to this at the fire scene last night."  While the Earth Liberation Front (ELF) took credit for the fire, authorities have wondered of Coronado was involved.  For a time he was an editor at their Earth First! publication.

He served eight months in jail for interfering with and trying to kill U.S. Forest Service employees who were trying to capture two to four mountain lions in 2004.   Officials had closed Sabino Canyon to capture and relocate several mountain lions who had attacked humans and were stalking pedestrians near an elementary school.   Coronado and his friends laid traps for the agents and laid false scent trails.  He was indicted on a felony charge of trying to injure an officer of the United States.  To terrorists like Coronado, the life of a mountain lion is more important than the lives of children engaging in everyday activities like going to school.

After 10 days of protests, Game and Fish decided to try to tranquilize, capture and move the lions to a wildlife rehabilitation center in north Scottsdale, more than 120 miles away.

But in the next six days, a state-hired trapper using dogs found only scattered lion tracks. The only dramatic moment came March 24, when authorities arrested Rod Coronado, an EarthFirst! activist who was dropping lion scent liquid into the canyon to mislead the dogs.

Coronado was arrested in February 2006 and charged for teaching and promoting terrorism during his numerous public speeches and interviews over the past several years.   He hid behind the First Amendment and claimed victim status.   He plead guilty and was sentenced to serve a year in prison.  After being released in 2008 he reconnected with his terrorist network and was sent back to jail for violating the terms of his probation.

It shouldn't shock you that he eventually figured out that he could make a living running a non-profit scam.   In 2013 he founded "Great Lakes Wolf Patrol," a non-profit that promotes protecting wolves from legal controlled hunts.

In a 2017 interview he admitted that he regularly goes into the woods to track and confront hunters in Wisconsin and Minnesota and waits 'outside their homes' so he can stalk them.  He drives a camouflaged truck with a fake 'hound box' in the bed to help him blend in with the hunters he's stalking and setting cyber lynch mobs online.   Hunters have faced online death threats because of his harassment.   He also admitted that he'd continue his criminal ways if he could get away with it and admitted that he frequently lied about his criminal past.  He was responsible for all of the attacks the FBI said he was.

“This is another over-the-top move by a convicted violent animal rights activist,” said Nick Pinizzotto, USSA president and CEO. “Coronado is known for his extremism and I encourage all sportsmen to be very aware when they enter the field in Wisconsin. Hunter harassment is illegal and should be reported immediately.” 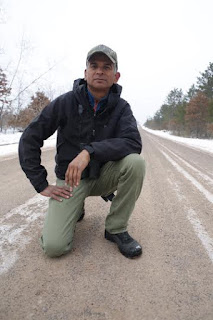 Posted by Katharine Dokken at 11:44 AM